Showing posts with the label Vickie Lynn Harrell
Show all 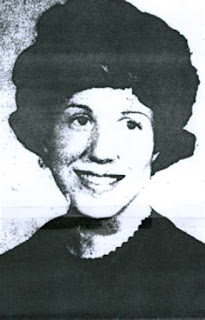 In August of 1972, a young mother got into her car at K-Mart and was not seen again. Her body was found days later. Who killed Vickie Lynn Harrell? August 12-15, 1972 Vickie Lynn Harrell was last seen getting into her blue 1965 Plymouth in the parking lot of the K-Mart where she worked. Vickie was a divorcee and mother of a young daughter living in Bloomington, Indiana. The following day, August 13th, Vickie's roommate, concerned that she had not returned home, called the police. She stated that she had not heard from Vickie and that is was unusual. However, we are not sure where her daughter is at this time. On August 14th, her car is discovered in the area of College Mall in Bloomington. One day before her 26th birthday, the body of Vickie Lynn Harrell was found. She was discovered by a worker of the Owen County Highway department facedown in the water in a ditch along the road. There is no evidence of a struggle at the scene but the letters KN are carved into her chest. Her a
Post a Comment
Read more
More posts