The Murder of Aisha Dickson

On a cold January day in 1995, 8 month Aisha Dickson was found dead after her family called 911. 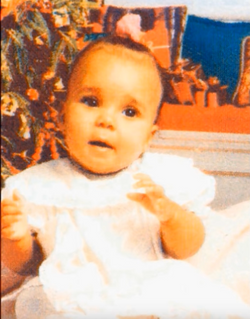 On January 6, 1995, Aisha was loving in an apartment with her mother, Sarah Johnson, her father, DeShawn Dickson, and her maternal grandmother, June Johnson. That day, baby Aisha had been discovered in her crib not breathing. Bangor, Maine police responded to the apartment on Bald Mountain Drive.

It was determined that Aisha Dickson's cause of death was blunt force trauma to the head. However almost every single bone in her body was broken. Her first injury occurred within the first few months of her life. Sarah also couldn't explain how she didn't know of Aisha's previous injuries. Not long before her death, she was also seen at her doctor's office. Despite consistently being underweight, it didn't raise any flags with her doctor's office.

All three adults present in the home denied involvement in her death. They each obtained separate lawyers and refused to speak with police.

In 1996, Sarah Johnson stated to the Bangor Daily News that she was afraid of DeShawn and that her mother had psychological problems.

In the years since the tragic death of Aisha Dickson, her grandmother June has passed away. Sarah and DeShawn went on to have more children who were eventually removed from their home by the state. All three of them remain suspects. Police say it is just a matter of someone coming forward and talking. 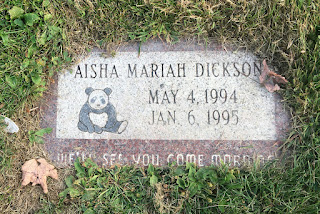 In 2019, Brian Stormann, who was listed in her obituary as an adoptive grandparent, said in an interview that Aisha's father DeShawn confessed to him the hospital. He reported this information to the police.

No arrests have ever been made.

If you have information regarding the death of Aisha Dickson, please call Bangor Police Department at 207-947-7384. 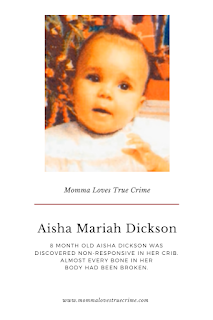