The Disappearance of Nathaniel Holmes

On the morning of December 19, 2017, 17 yesr old Nathaniel Holmes was dropped off at school by his mom. He has never been seen again. 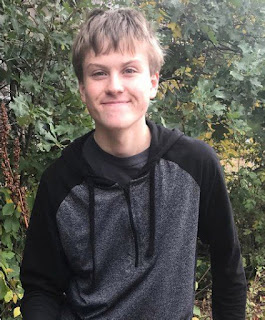 That morning when his mom dropped him off at Hidden Lake High School in Westminster, Colorado was just a normal morning. She was planning on picking him up that afternoon. His dad, Ben, had custody of Nathaniel since his parents divorce nine years earlier.

According to his father, Nathaniel had gotten into trouble recently. He was transferred from his online school to Hidden Lake about five weeks prior to his disappearance after falling behind on his studies. The night of December 18th, according to his father, Nathaniel appeared to be on something. Since Ben had to go to work, he sent him to his mother's house so he could be monitored.

Once at school, Nathaniel went to the principals office and requested to see a friend. After the principal refused to pull the student from class, Nathaniel walked out of the building. He was not present for any classes that day. At some point he did call his mom to tell her he didn't need a ride home as a friend would be taking him home

While police believe he left on his own, the Holmes family believes foul play as involved.

If you have any information regarding the disappearance of Nathaniel Holmes, please call the Westminster Police Department at 303-658-4360. 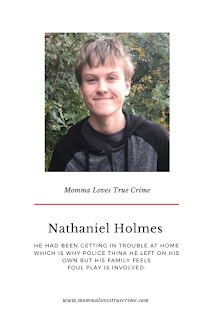