The Disappearance of Timothy Guy

In 1987, stable hand Timothy Guy was last seen getting into a car with a man named Jeff at Sleepy Fox Farms in Forsyth, Georgia.

Timothy had recently moved to Forsyth from Snellville, Georgia. He had a learning disability which made him act younger than he was according to his family. Tim, as his family called him, had become a stable hand on the horse farm.

Other workers at Sleepy Fox Farms said that they last saw Tim around 9:00 p.m. on February 7, 1987. The foreman, Phillip Klinger, provided the following information about the mysterious "Jeff". Jeff was driving a 1972-1974 Chevy Impala. He was "big boned" with a muscular build and had brown hair and a beard. His last name is not known.

The Guy family questions if Jeff was even a real person. Due to Phillip Klinger's history of numerous arrests and the information that Warren Guy, Tim's dad, learned from a man named Tom Black. Mr Black is said to have told Warren that he discovered what happened to Timothy Guy. He stated that Tim was killed and his remains were put into a tree shredder before being put into the Chattahoochee River.

No trace of Tim has been seen since the February day.

If you have any information regarding the disappearance of Timothy Guy, please call the Forsyth County Sheriff's Office at 770-781-2222 of the Georgia Bureau of Investigation Tip Line at 800-597-TIPS. 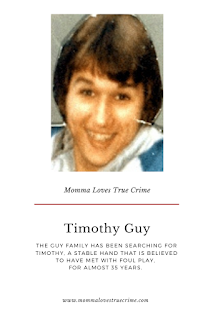