The Disappearance of Mindi Chambers

On the morning of October 19, 1982, 17 year old Mindi Chambers walked her stepsisters to school in Tempe, Arizona. That was the last time they would see Mindi.

A History of Tragedy

In 1968, Mindi's mother was murdered. Mary was drowned in the bathtub of their home. Her father, Allen was a suspect but never charged. When Mindi was 2 years old, her father went to prison on unrelated charges. From this time until the age of 7, Mindi lived with her grandmother.  When Allen was released, Mindi went back to living with him.

The Days Leading Up to Mindi's Disappearance

Then, just a few days before she disappeared, Mindi reported to police that her father had been molesting her for years. They immediately placed her with her stepmother who was separated from her father at the time. The couple were divorcing. However, CPS quickly dropped the investigation. Allen actually hung up on CPS when they called him regarding the allegations.
When her sisters arrived home that day, Mindi was no where to be seen. Yet her purse, ID, and other belongings were there. It's been reported that there was no evidence of a struggle at the home.

That October morning, a clerk at a Circle K on the corner of University and Prince in Tempe, Arizona saw Mindi make a phone call at that location. Then, the clerk saw a green and tan station wagon pull up. The driver then pulled Mindi into the car and drove away.

It has been reported that Mindi had a history of running away from home. However, this hasn't been confirmed but could that be why police treated her as a runaway instead of a missing person?
Mindi Chambers was not actually reported as a missing person until 1995. One year after Allen died. Police believe the Mindi met with foul play in 1982. Mindi's sister has also stated that Allen had a station wagon that was green and brown at the time her sister disappeared.

If you have any information regarding the disappearance of Mindi Chambers, please call the Mesa Police Department at 480-644-2211. 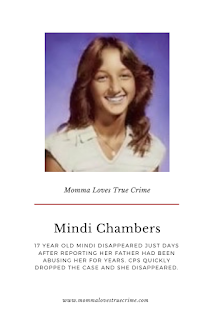