- July 07, 2020
June 22, 2013, is the last time Brookelyn Farthing was seen after a mysterious fire at a friend's house. Where is Brookelyn Shae Farthing?

At the time of her disappearance, Brookelyn was an 18-year-old blonde from Berea, Kentucky.
Brookelyn's sister has described her as "a spunky, tell you how it is, loveable person. She loved animals and the outdoors. But she was a true girly girl, who loved pink and camouflage. She would do anything to help anyone. She had the sweetest deep long country sounding voice you can only find in Kentucky."
She  sounds like a typical girl here in Kentuckiana. 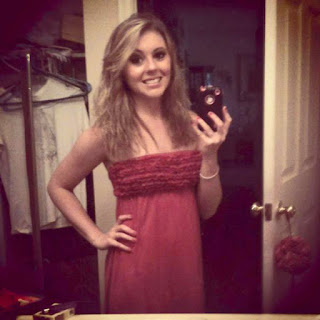 The Night of Her Disappearance

The night Brookelyn Farthing disappeared, she went out with her younger sister and cousin to a birthday party.
Shortly after arriving, her cousin and sister decided to leave. Brooke had made plans to spend the night with a close friend and had taken some things with her for that. However, those plans fell through. She had a disagreement with her friend that she was supposed to spend the night with. Her friend wanted to spend the night at a boy's house and Brooke just wasn't feeling it.
So she stayed at the party. At the end of the party, Brookelyn was seen leaving with 2 men.
Allegedly, the drive to look at some horses. Then, one of the men is dropped at his home and Brookelyn continues on with the other man to his home. The home they went to on Dillon Court has no electricity or running water as it was in foreclosure. 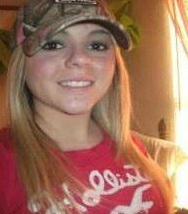 Looking for a Ride

Around 4 am, Brookelyn called her younger sister, Paige, to see if their cousin could pick her up. However, the cousin had been drinking and was not able to pick her up.
She then called her ex-boyfriend for a ride since he worked a 3rd shift job. She made plans for him to come to get her when he got off work. Sometime later, she sent a few texts to him asking him to hurry and get her because she was scared. Then, the last text stated "never mind" and that she was going to a party in Rockcastle.
When she failed to show up to plans she had made the following day.
After 2 pm, her family became worried and started making calls. They eventually obtained the number of the man who's home she went to. During the phone call with her family, he gave two stories as to what happened. 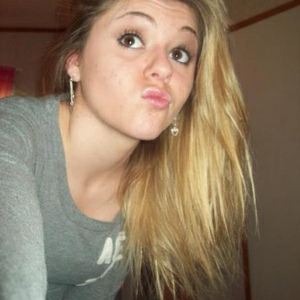 The first was that he didn't stay in the house because he did not feel comfortable as he was friends with her ex.
Then he called the family back stating he was scared. All of her belongings were still in the house. When he returned back to the house later that morning it was on fire. He states he had seen Brookelyn smoking on the couch. 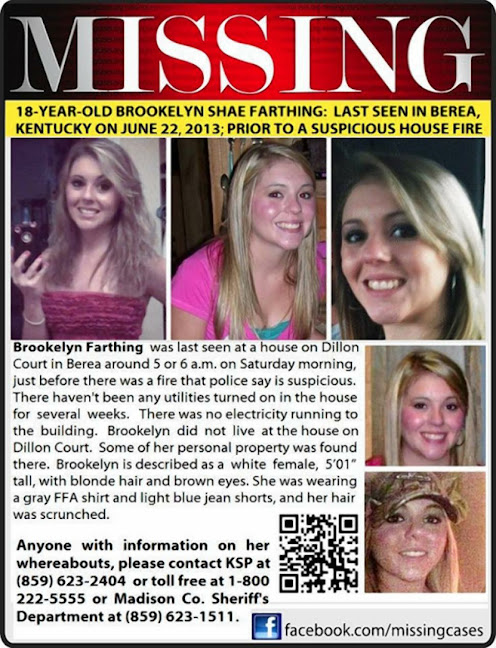 In the days following her disappearance, a massive manhunt was underway. Cadaver dogs were brought in but nothing came of it. Investigators believe that the fire in the home she was last seen in was staged as a distraction.
They do not believe that she started the fire herself. Her ex-boyfriend also states that he doesn't believe the last text message he received from her phone was from Brookelyn.
She has never been seen since. I have not named the 2 men she was last seen with as they have not been charged. However, there has been a post on topix of a rumor someone in the area heard.
Ultimately, no one knows where she is or what happened to her. Again, this is a smaller town, someone knows something.
If you have information regarding the disappearance of Brookelyn Farthing, contact the Kentucky State Police at 859-623-2404. 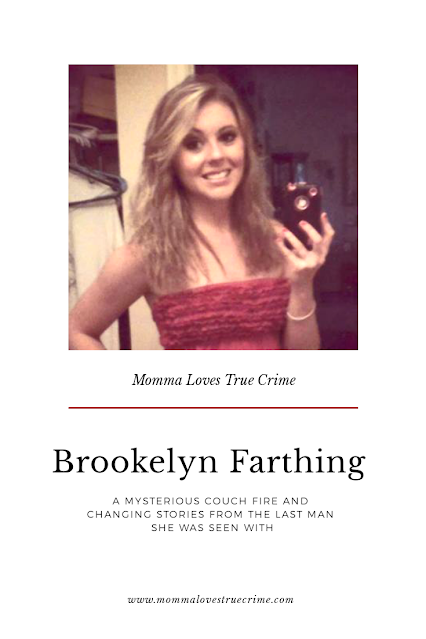