The Disappearance of Anna Lee Manning

Anna was last seen with an unknown white male outside Chinn's Jewelry. She called out to her aunt that she needed to speak with her. That was the last time anyone heard from Anna It took 15 months for an official missing persons report to be filed.

At the young age of 16, she married Anthony Manning. Her marriage was one of control and isolation. Due to this, Anna was very distant from her family. Her family didn't even know where she was living when she disappeared.

By this time, Anna and Anthony had separated. They had a daughter who was a toddler at the time. One day Anthony dropped their daughter off to Anna but this wasn't a typical drop off.
Allegedly, he walked in the house with their 2 year old daughter. When Anna refused to have sex with him, he handcuffed her. Then, he lead Anna outside but she managed to escape when he took their daughter and her purse to the car. He later pled guilty to unlawful imprisonment and spent 182 days (152 days were probated) in jail.
At the time of Anna's disappearance, Anthony was in jail. 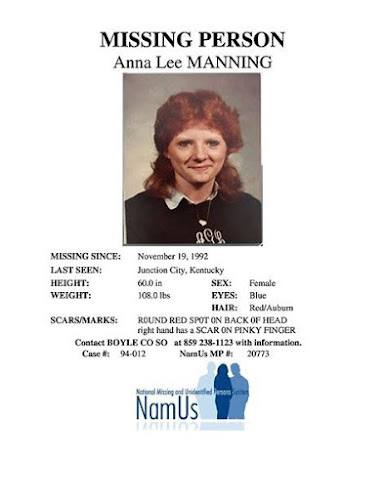 In 2016, a Boyle Count Sheriff's Deputy was assigned as the lead Anna's case. Sherriff's Deputy, Phillip Dean, said he would not give up on her case. He utilized the local newspaper to ask the public for help. One tip lead him to a property owned by Anthony Manning's parents.
Despite an 11 hour search, nothing conclusive was discovered. Dean feels that someone in the community has the key to Anna Lee Manning's disappearance.
If you have any information regarding the disappearance of Anna Lee Manning, please call the Boyle County Sheriff's Office at 859-238-1123. 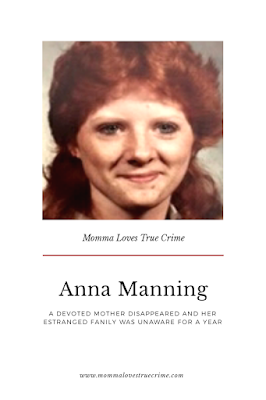