The Disappearance of Angela Hammond

- January 21, 2020
On April 4, 1990, in the small town of Clayton, Missouri, Angela Hammond stopped at a payphone to call her boyfriend. Then, a scream came across the phone and she was gone. Never to be seen again. Where is Angela Hammond? 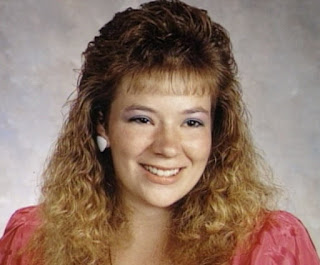 Who is Angela Hammond

Angela Hammond, better known as Angie, was a small-town girl with big dreams. 20-year-old Angie was petite at just 4 for 11 inches tall. She was smart and outgoing.
Rob Shafer and Angie met two years earlier and the rest was history. While they were excited about the arrival of their baby within the next 5 months, they were chasing their dreams. Angie was in college and Rob was going to enlist in the military.
Everything seemed to be on track for the happy couple.

Rob and Angie made plans to meet after he was finished babysitting his little brother. Angie met a friend that evening to hang out before meeting Rob. Around 11 pm, she said goodbye to her friend but decided she was too tired to do anything else. Being 4 months pregnant, this is a totally normal occurrence.
She stopped by a local payphone to call him. While at the payphone outside the Food Barn Store, she talked with Rob for a length of time. Depending upon what you have read, I have seen it say anywhere from 15-30 minutes.
Remember this was the early 1990s, so cell phones were not in everyone's pocket. 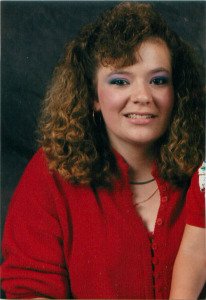 While talking with Rob, Angie noticed a late model, green pickup truck circling the lot. It made her feel uneasy enough to tell Rob about it. She gave him a description of the man who eventually came to use the payphone next to her. Rob states that Angie told him the man was bearded, dirty and wearing overalls.
He also had on glasses and a dark-colored baseball cap. She told him that the man had gotten out a flashlight and seemed to be looking for something around his truck. At this point, she asked the man if he needed to use the telephone she was on. This strange man replied that he did not.
The next thing Rob heard over the phone was Angie screaming.
Only 7 blocks away, he rushed to his truck to go to his fiance's location. On his way there, he passed a truck similar to what Angie described. There was a woman inside struggling and he heard a woman yell "Robbie".

He shifted the truck to reverse and made a hard U-turn to follow the green truck. Rob's truck made it about two miles before the transmission malfunctioned. He was not able to catch up to the truck he believed Angie was in.
His only choice was to walk back to town to report the incident to authorities. Luckily, a passerby picked him up and took him to the police station. He arrived there just after midnight.
When questioned by police, Rob was able to give a better description of the vehicle. He estimated it to be a late 60s or early 70s green Ford F150 with a white top. There was body damage to a fender as well. The truck had a mural on the back windshield of a fish jumping out of the water. There was a sketch done however it is not accurate per the description provided. The sketch shows a man with no beard. 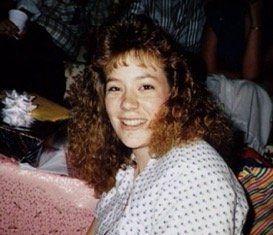 For the first week of the investigation, the main suspect was Rob. Police thought his story was too convenient. Although, they found his truck broke down where he said and Angie's car abandoned with her purse still inside. Eventually, they cleared him but wasted precious time that could have been used for looking elsewhere.
A rumor that had run rampant, as they do in small towns, was that Angie's ex-boyfriend, Billy Baker, was involved. He was also cleared as well. At this time the community rallied around Angie's family. Conducting searches, putting up fliers, and doing whatever they could.
Angie was never seen or heard from again.

After searching and clearing 1600 vehicles matching the description of the vehicle Angie's abductor was driving provided no clues. The police were at a loss. Their only thought was if this could be connected to two other disappearances in the region.

January of 1991, Trudy Darby was working a night shift in a gas station in the tiny town of Macks Creek. Around 10 PM, she called her son asking him to come to the gas station. 3 men hanging around outside and it made her feel uneasy. 10 minutes later, her son arrived, but she was gone. Trudy disappeared without a trace. Trudy's body was discovered 15 miles away in a creek just two days later.

Just one month later, in February of 1991, in Nevada, Missouri Cheryl Ann Kenney went missing. While working a closing shift at a convenience store, she decided to close early since it was so slow. She sent the store custodian home around 10 pm while she counted the till for the night. The building's security alarm was set at 10:17 pm. Cheryl Ann was never seen again. Her car was still in the parking lot of the Quality Convenience Store. Cheryl Ann's case is still unsolved. However, there was an arrest in Trudy's murder in 1994. Jessie Rush and his half brother, Marvin Chaney were arrested after Rush bragged to friends about his involvement. While in jail, Rush again talked about being involved in more unsolved crimes to a fellow inmate he believed to be a lawyer. They were eventually cleared in Angie's case. There is no hard evidence linking them to Cheryl Ann either. 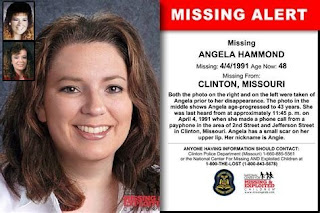 Unsolved Mysteries covered the case in the hope of getting new leads. There were a few sightings of Angela Hammond in the years following her abduction. However, they were false leads. In the almost 30 years since her disappearance, very little has come to light in Angie's case.
In 2009, police announced they had new evidence of the DNA type but never said anything further.
If you have any information in the abduction of Angela Hammond, please call the Clinton Police Department at 660-885-5561. 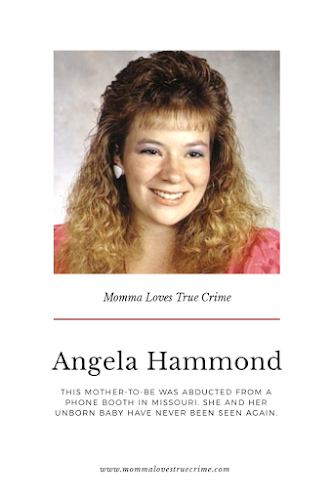